HOPES, DREAMS AND DIGNITY initiative Rolled Out in Siaya to Aid Good Leadership

A women’s group has launched a nationwide program to raise the hopes and aspirations of women and youth in Kenya as it rallies them to vote for dignified leaders in the August polls.

The initiative, HOPES, DREAMS AND DIGNITY rolled out in Siaya County over the weekend will address the challenge of accessing sanitary, underwear and shoes to school-going children, ensure this is highlighted across the country and improve enrolment rates in schools. 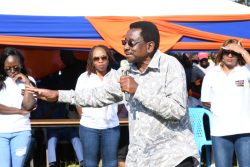 Siaya Senator addresses the crowd during the inaugural event

Siaya Senator James Orengo, hailed the initiative as very important in raising the status and position of women in society, especially during this general election campaign season.

The Senator, vying for the Siaya gubernatorial seat called on Kenyans to bequeath the country with dignified leaders during the next general elections, affirming people with tainted records cannot be trusted with leadership as he urged voters to reject such leaders.

“The word dignity is in our constitution. Therefore, every human being must have respect. We want leaders who have respect and can be respected,” he said.

The initiative’s Founders unanimously selected Senator James Orengo as the inaugural national champion winner, making him the first County patron to be chosen.

From his days as a student to his latter political life, the founders said Senator Orengo has been at the forefront of challenging Kenya’s governance system -which itself was meant to deliver the hopes of our young democracy. 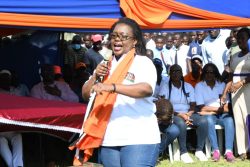 “His efforts can be directly attributed to the realization of canyons dream for better governance through the Devolution system and the decentralization of power from the executive,” said Senior Government Advisor and one of Hopes, Dreams and Dignity founding Champions, Elizabeth Adongo.

The initiative will go round the country to sensitize the youth on the need to carry themselves with dignity during the campaigns.

Another founding member, Ruth Mueni urged the youth to vote wisely during the forthcoming general elections and shun leaders inciting them to violence. 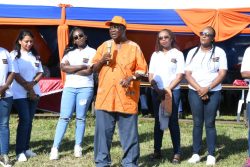 “The initiative will, apart from the peace campaigns, be donating food and sanitary towels to the vulnerable youths,” she said.

The initiative recognizes and celebrates leaders who have inspired hope and secured dreams of residents by giving them opportunity to live a dignified life through provision of clean and reliable water, access to healthcare services and better governance. 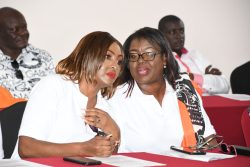 Carole Mandi and Elizabeth Odongo during the event

It distributed sanitary towels to select Schools in Bondo, Rarieda and Gem Constituencies. More than 5,000 students have benefited from this program so far.

HOPES, DREAMS AND DIGNITY initiative Rolled Out in Siaya to Aid Good Leadership

A WordPress Commenter on Hello world!

Newspaper is your news, entertainment, music fashion website. We provide you with the latest breaking news and videos straight from the entertainment industry.